It was that wonderful time of the year where you don’t want to get caught without a beard or a garter on. Welcome to the 57th Yukon Rendezvous Festival! It ran from February 12-28 and has a little something for everyone to enjoy! This was my first time being present for it and I really had no idea what to expect- especially during a pandemic. This year, there were many virtual ways to participate worldwide as well as in-person activities. The Yukon Rendezvous Festival began as a competition for people of Canada and the U.S. to compete in winter sports and as a way to help shake off the winter blues. Normally, Rendezvous brings in people from all over to help us celebrate another winter coming to an end. The festival has evolved a lot since it began- here is a peek at what it was like this year.

Queen Brenda Pilatzke-Vanier and Russell Radwanski aka “Steamboat Willy” will reign for one more year as Rendezvous Queen and Sourdough Sam. During more normal times, Yukon residents would compete for the crown or the cup. I still don’t really understand how it works, but it’s really just a giant fundraiser for both the festival and the winner’s chosen charity. The winners get to be ambassadors for the festival- visiting the communities and attending fundraising events throughout their reigning year. I love the Gold-rush-era-vintage-costumes the crown seekers wear and the Sams come up with some crafty personalities that win over the crowds, often with laughter. Although there were no competitions this year, there were a few Sourdough Sam Showcases held. There were multiple nights to get free tickets to the shows. Each show was different and showcased different Sams. I was lucky enough to attend one show and had a fun time! The shows were held outdoors, with a trailer being used as the stage. The committee did a great job of ensuring everyone’s safety and the shows were a hit. The Snowshoe Shufflers also did a couple of dances for their adoring fans. The weather wasn’t great the night I went, it was snowing and a bit chilly, but that didn’t stop anyone from bopping out to the songs and cheering on the performers.

As I mentioned earlier, this is not the time to get caught without your garter or a beard! The Keystone Kops were out-and-about arresting people who were not following the Rendezvous rules of having a beard or wearing a garter. But there’s another way to get arrested too. Boss made you stay late? Need a bit of quiet time at home? Have an arch-nemesis? Well for a minimum $30.00 donation, you could have the Keystone Kops pick up that person and have them publicly put in “jail” until they either sing, dance, tell a joke or bribe their way out. It is possible to evade getting put in the slammer by paying them off- they are quite corruptible! For a $5 donation, you could purchase a button to keep yourself out-of-jail. All bribes/donations were put towards Youth Groups in the territory.

This was the one event I really had hoped to make, but I had prior commitments. The show was available in person at the Yukon Arts Centre (which sold out in no time!) and virtually. The show featured Yukon’s own fiddler, Sarah Hamilton and the Fiddleheads. There was even a virtual performance after the initial show by Mark Sullivan, a three-time Canadian Grand Master Fiddle Champion. From what I heard from those who did attend, the show was amazing and kept their foot tapping the whole time if you were able to stay in your seat and not dance- one of the benefits of watching virtually!

Drag show was still a go!

Yukoners have been able to enjoy the drag show in person in the past, but this year it all took place virtually. With the option to pre-purchase a VIP pass, that gave you exclusive time with the Queens virtually before the show and a VIP cocktail package from Yukon Brewing, you just knew you were in for a good time! The VIP tickets sold out quickly, so I had to settle for tickets just to the show. There was no shortage of fun being had. We enjoyed the show with our bubble as we sang and laughed along. Great job Tuck Entertainment for such a fun night!

Fireworks lit up our sky

Our New Year’s Eve fireworks display was cancelled this year due to COVID19, so Yukoners were excited to have the Pyro Musical back again. Produced by Warren Zakus and Kiara Adams, Midnight Sun Fireworks lit up the sky with colour matched to some great tunes! Since it’s too light out in the Yukon for Canada Day, this is one of the few times we get to enjoy fireworks and the display was phenomenal! This was the best display I have ever seen. Definitely not going to miss them next year.

With no shortage of snow this year, six teams worked away on some incredible snow sculptures in Shipyards Park. There were also several family/friend bubbles who carved sculptures too- they just had a pre-register to reserve their block of snow. I volunteered one morning to assist with crowd control and to help ensure the safe 6 + 1 were taking place. Spectators were patient and respectful while they enjoyed the magnificent snow art.

Participants of the free Snowpad games competed for actual gold nuggets and a whole lot of glory, as they threw axes, chainsaws and logs. Even if you’re not into tossing one of the items yourself, it sure is entertaining to watch! Kidfest had tons of activities for children including colouring contests, log toss and mini flour packing.

There are no shortages of beautiful hand-crafted works of art here in the Yukon. The Cultural Craft Fair, held at the Kwanlin Dun Cultural Centre, gave artists a chance to sell their handiwork and it was a huge success! I look forward to seeing what the talented artists have come up with and were delighted to see three tables full of work completed by youth within the Yukon.

Living in the Yukon can sometimes be quite cold, so why not grow your hair to help keep you warm? This year there were photo contests held for Best Beard, Hairiest Armpit and Hairiest Legs. All contestants brought their A-game! There were also contests for Best Upper Body Ink and an image or video demonstrating your “Yukon Strength”. The Upcycle Fashion Challenge brought some amazing outfits to the spotlight. This fashion show challenge is to turn your waste into fashion! Using a minimum of 75% recycled materials, artists are to come up with one clothing item to submit. People are impressive! Until you know what the materials used were, it’s hard to tell what the items were in their previous lives. There was a business décor challenge that had businesses compete on who shows the most Rendezvous spirit. Then there’s the pets. Yukoners love their pets and it shows through the virtual pet parade. This year, there were four categories to enter your pet: Best couple/group, Best homemade costume, Best quarantine/ICEolation collaboration and Best “not all heroes wear capes, but sometimes they do” costume. Poor Amy, my tripod dog, was forced into four costumes to join in the competition. We had a great time choosing and creating the costumes and it paid off! Amy won best quarantine/ICEolation collaboration. Not bad for her first Rendezvous. Finally, there was the much-loved dog howling competition, also held virtually. The videos can be found on the Yukon Rendezvous Facebook page and so can all the other competition photos.

On the final weekend of Rendezvous, there were live performances taking place. Advanced-free-tickets were required to help ensure physical distancing. Local performers took to the stage including the Snowshoe Shufflers, the Yukon Rendezvous Air North Can-Can Line, The Mozart Effect, Will Pacaud Band, Soda Pony, Shagadelica, Telek Rogan, Blue Persuasion, Garbageman, Paris Pick, Klondike Claire with Calvin Laveck and more! All performances at the Yukon Arts Centre were also live-streamed, free of charge. I never tire of seeing the can-can dancers kicking and Will Pacaud Band sure did a great job of rocking out!

During a regular Rendezvous season, the Quest for the Crown candidates are the ones who are selling the majority of these tickets, but not this year. With only five thousand tickets printed and over $19,600 in prizes, your odds are pretty good! For $20.00 a ticket, you could possibly win a $10,000 gift certificate to Listers Motor Sport or a tour for nine passengers to see Mount Logan Glacier with Alkan Air. There were a total of thirteen prizes this year and even though I crossed my fingers and toes, I didn’t win the flightseeing tour nor any of the other prizes. There’s always next year.

Although it was a scaled-back parade from what Yukoners are used to, it still happened. The can-can dancers, Snowshow Shufflers, Keystone Kops, Queens, high school students, pets and others participated in the parade. A few of the floats celebrated all the hard work our health care workers have been doing. The parade of old cars, floats and walkers made its way down Main Street, up Front Street and ended in Shipyards Park, allowing for plenty of space for spectators to practice the safe 6 +1 while taking in the celebrations of another successful Rendezvous Festival.

Although this was my first Yukon Rendezvous Festival, it will not be my last! I look forward to next year’s events and hope for a more traditional Rendezvous celebration, where all the standard events can go on as intended. Even though it was a much different Rendezvous this year, I still thoroughly enjoyed it and am counting down until Rendezvous 2022 and I hope that you too can join in next year.

Hero Picture- Snow sculpture selfie before volunteering (taken before it opened for the day). Photo taken by me 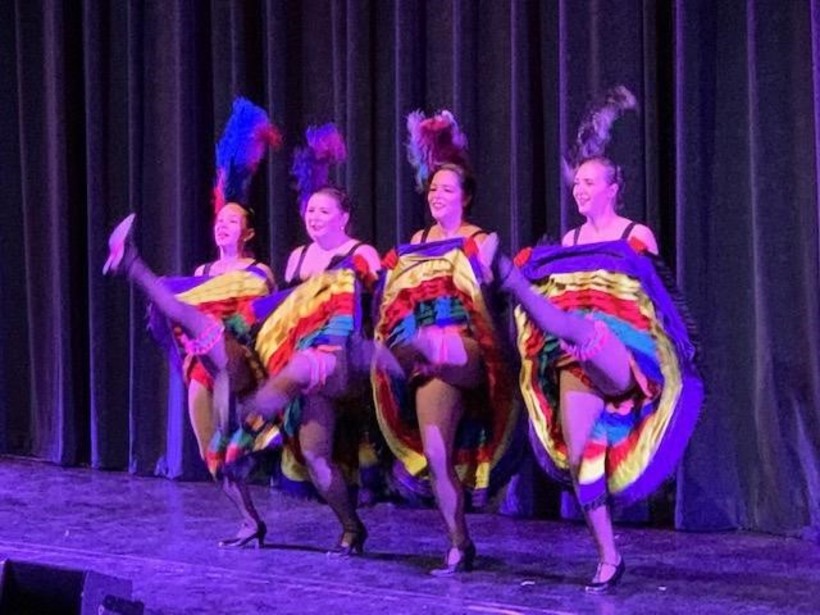 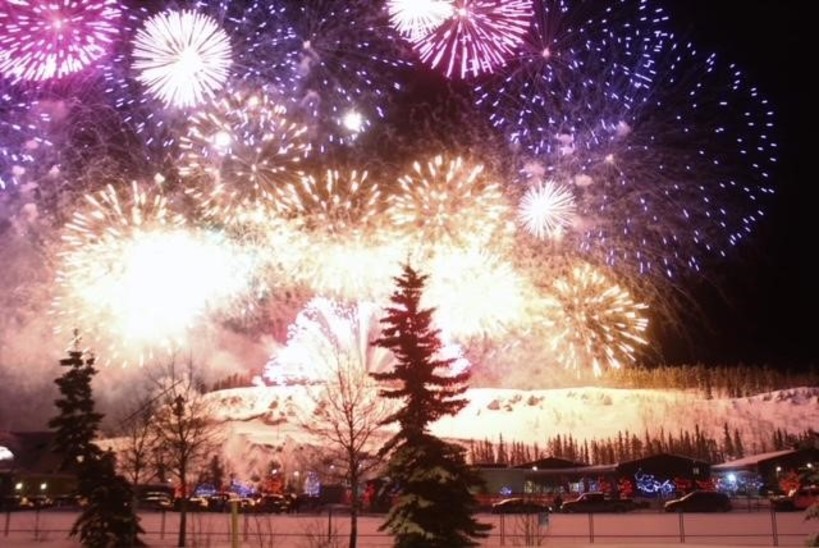 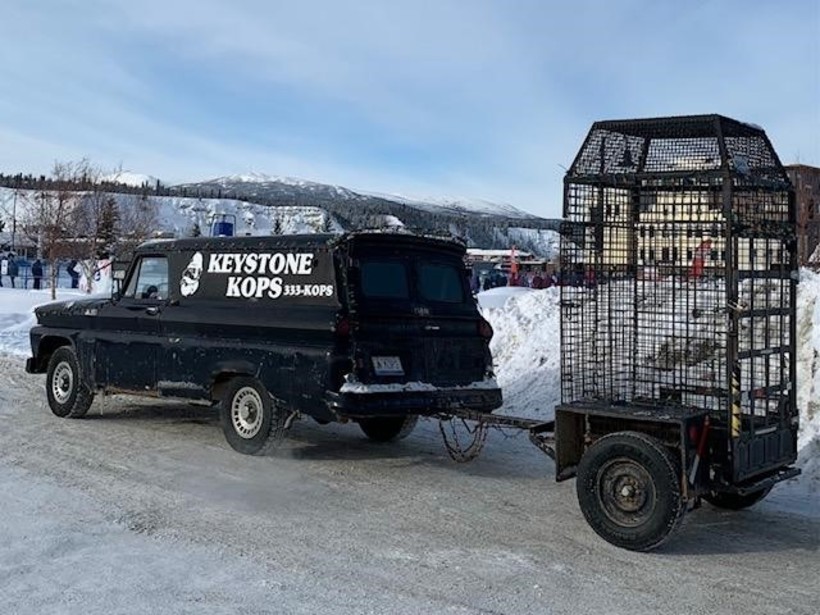 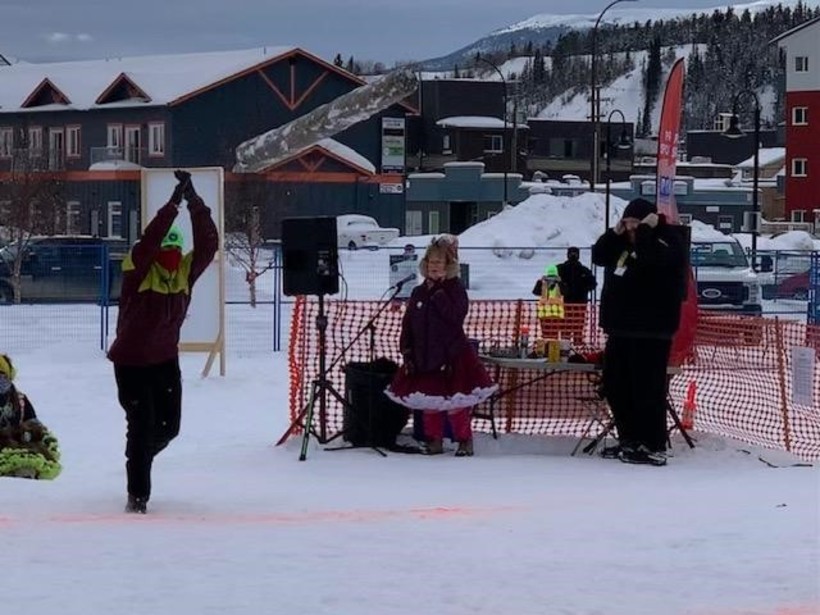 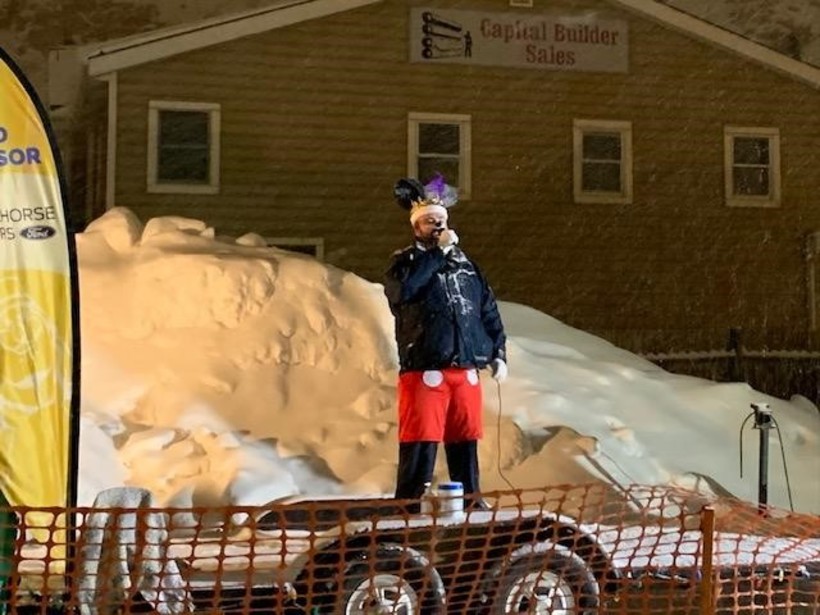 “Steamboat Willy” (the present Sam) performing at the Sourdough Sam Showcase, on a snowy evening

Photo taken by me. 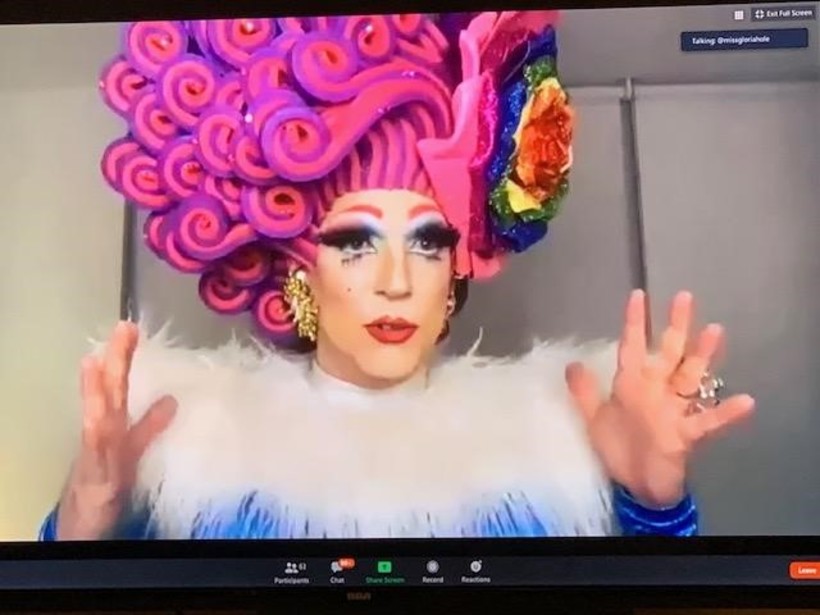