A Dozen Quick Facts on this Stunning Territory

Whitehorse is the capital of the Yukon Territory and has a population of 33,119 people and the whole territory combined has a population of 42,152 (according to the Yukon Bureau of Statistics). The Yukon covers 483,450 km² of land and is said to have nearly double the amount of moose as it does human inhabitants. There’s a whole lot of land for wildlife to roam full of lakes, rivers, mountains, volcanoes (active and dormant), glaciers, deserts, tundra and lush forests. Statistics say that 80% of the Yukon is still wilderness- Yukon really does have it all. Here are twelve quick facts about this gorgeous territory:

There are fourteen Yukon First Nations and eight language groups. (https://yukon.ca/en/about-yukon-first-nations). Eleven of the First Nations have reached their Final Agreement and Self-Government Agreement, while the other three are still in negotiations. The Self-Government Agreement gives each of the eleven First Nations “the power to make and enact laws in respect of their lands and citizens, to tax, to provide for municipal planning, and to manage or co-manage lands and resources.” (https://cyfn.ca/agreements/self-government-agreements/)

2- The Yukon has the World’s Smallest Desert

Sure, it’s not your stereotypical desert. You won’t find any reptiles as no reptiles nor amphibians are living in the Yukon (except for the Wood Frog), but due to the lack of precipitation, Carcross Desert is a true desert. Measuring approximately 2.6 km², the desert is full of fun activities for every season. Some popular activities include tobogganing, snowmobiling, biking (motorized and not), ATVing and hiking.

3- The Yukon is home to Canada’s highest peak

Forget the Rockies- Yukon has them beat with some of Canada’s tallest peaks in the Saint Elias Mountains; including Mount Logan that is Canada’s highest peak and the second highest peak in North America standing at 5959 m high in Kluane National Park. In order to see it, you would need to hike a fair distance or hop on a plane as Mount Logan is deep within the park. The Yukon is also home to the top eight highest peaks in Canada.

The Saint Elias Icefield is the world’s largest non-polar icefield and it’s located within Kluane National Park. “It occupies more than half of the park and incorporates glaciers that stretch for 60km”. (Guinness World Records)

5- Yukon has its own Airline

“Air North is 100% owned by Yukoners, including the Vuntut Gwitchin First Nation. One in 15 Yukoners hold an equity or employment stake in the airline.” Air North not only flies throughout the territory but also into British Columbia, Alberta, Northwest Territories and Ontario (Once COVID will allow for more travel). What makes Air North stand out, even more, is that all their meals are freshly made by their Flight Kitchen- including their super delicious cookies. You can actually order their meals online or pick them up in the freezer section at Wykes Your Independent Grocer. From personal experience, they are not your typical airplane food. So much flavour and you can tell the ingredients are fresh- I actually just put another order in last night.

6- Most roads are in decent shape

It’s not hard to get around Yukon if you have a vehicle. Preferably something a bit higher off the ground for better clearance and all-wheel-drive just in case. If renting a vehicle, get the full coverage insurance as chances are pretty good you will at least take a chip out of the windshield. It’s rare to see a windshield intact in the Yukon. During the winter, do not expect the roads to be down to the pavement, making for tricky driving conditions if you are not used to winter driving. In the summer the roads are in decent condition with any questionable areas marked with flags. Construction zones may differ significantly from what you are used to. On the major highways they are often down to the dirt, can be very slippery and you may have to wait for a pilot car to lead you through the section which can be over a km long.

7- No, we don’t have 24 hours of darkness nor light (unless you’re far north)

The longest and the shortest days of the year still both offer us light and dark in Whitehorse. Although the sun may only rise after 11:00 AM in the winter and be set before 5:00 PM, we do still have some daylight. The sun doesn’t look like it ever really rises as it will stay low on the horizon. It’s much easier to adjust to the long daylight hours, with the exception of remembering to go to bed!

Yukon is all about repurposing and finding a way to reduce our garbage. Yukon is in the process of banning single-use plastics and paper bags. Every drink container (carton of milk, pop can, alcohol container, water bottle, etc.) has a deposit on it to help ensure people do recycle them. One of my favourite places in Whitehorse is Raven Recycling. Unless you pay for curbside pickup, most people bring their recycling to Raven. They collect everything from cardboard, single-use plastics, refundable containers, textiles, egg cartons, newspapers, tin cans, scrap metal, electronics and paper. Nearly all products have a place other than the garbage and many get reused (for example newspaper is given away for fire-starter) or repurposed. Yukon is less of a throw-away place than most and has countless Buy and Sell groups to help with repurposing furniture, clothing, vehicles and so much more.

9- No shortage of hiking within the City Limits

“There is an estimated 150 km of trails of city-wide significance and at least 700 km of local and neighbourhood trails used by Whitehorse residents.” (Whitehorse- The Wilderness City) So yeah, there are a lot of options even within the city of Whitehorse and a lot of the trails are multi-use trails throughout the seasons. The hardest part of hiking might be choosing your route!

We are lucky to be home to three types of bears: Grizzly bears, Black bears and Polar bears. Polar bears only live in the far-far north, so chances of an encounter are incredibly slim. As for Grizzlies and Black bears, your chances of seeing one is likely. Always be bear-aware and carry bear spray with you, regardless of the season. (See Stay safe in bear country for more details on how to be bear-aware). Practice safe roadside viewing at all times (Safe roadside bear viewing). They may look cute and fluffy but remember, they are wild animals.

Sure, there are some chilly days throughout the winter, but if you dress for it you won’t even notice! The dry climate helps you to feel warmer than it really is. The average temperature during winter is -18°C and 15°C in the summer. So, the weather could be colder and hotter than these averages. Pack accordingly keeping in mind layers are always best.

Well officially it is only Yukon and not The Yukon, but everyone here still use the “the” and you will probably stand out if you don’t. The name was changed in 2003 and Yukoners just don’t care for the change. They will continue to use the “the” and I’m guilty of it too. It just sounds weird to not use it.

I know this was a quick overview, so keep your eyes out for future blogs that will go into more details on some of these awesome Yukon facts. I’m sure you can tell I’m madly in love with this amazing territory and want to shout from the mountaintops how incredible this place truly is. When the time is right, I hope you will consider spending some time exploring THE Yukon.

Hero Picture: The road looks clear, but is actually covered in ice. Winter driving in the Yukon can be a challenge sometimes. Photo taken by me (not while driving)

Adam with Penny and Amy at the Carcross Desert in November 2020.

Image compliments of the Yukon Government 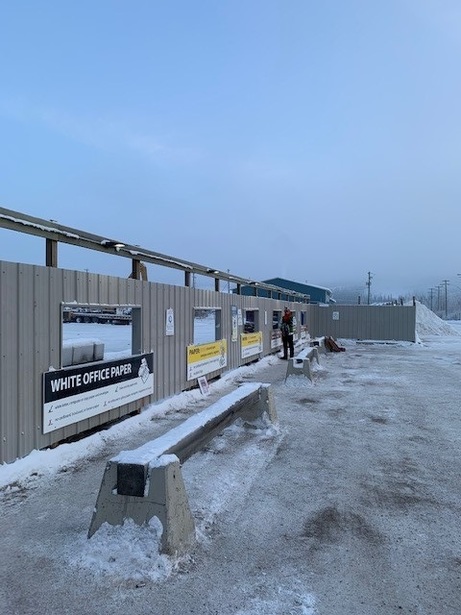 Dropping off our recycling Christmas day. 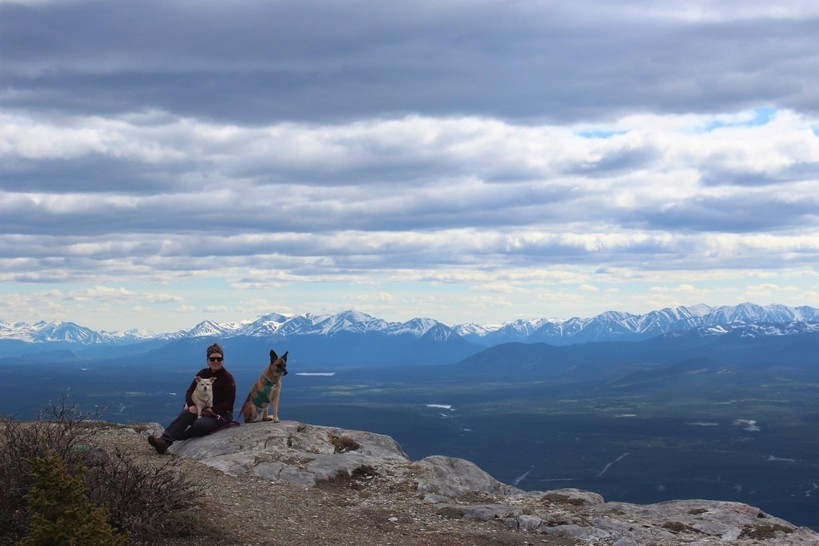 Grey Mountain Summit is a hiking trail within the city limits with amazing views of the city below, while surrounded by other mountain peaks. 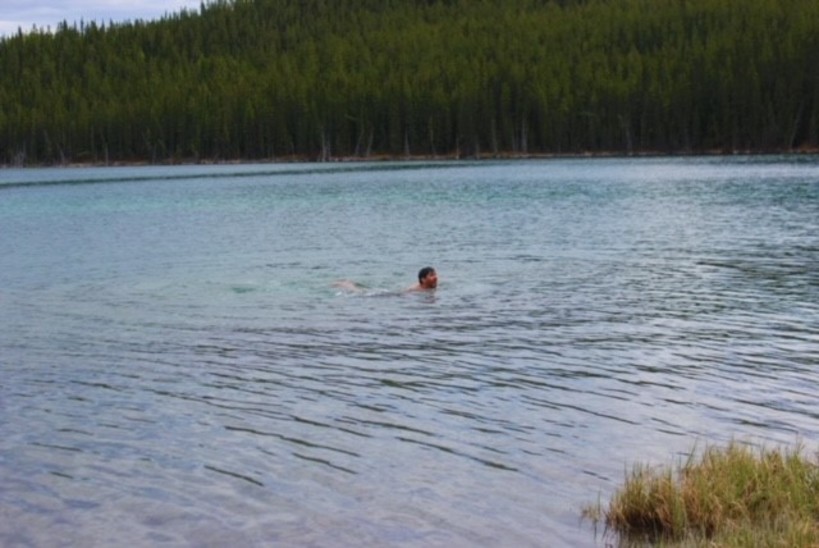 Although most people do not find it warm enough to dive into one of the lakes, Adam does. Taken on May 28, 2020 at Chadburn Lake! (Lake was about 6 or 7 degrees)

Photo captured by me