Spring is in the air…well, soon!

With the snow still on the ground and Ground Hog day not that long ago, it has me thinking about wildflowers of the Yukon. One of the amazing things about the Yukon is it seems to always be blooming- when there isn’t snow. The Yukon is home to more than 1250 species of flowering plants! Here’s a look at some of the common wildflowers you may see on your journeys throughout our colourful territory.

Fireweed is the Yukon’s official flower and can be found on our territorial flag. Although it can be found in other parts of Canada, they are quite common to see all over the territory. Fireweed is one of the first plants to begin regrowth after a forest fire. Coming in colours between pinks and purples, the blossoms have a lovely fragrance and bloom from mid-July to September. In the fall, the plant turns a fire red colour- adding to our beautiful fall colours. It is said that once the last fireweed petals fall, you can expect snow. Nearly the whole plant is edible; even the shoots can be cooked like asparagus. You can find a whole lot of products using fireweed! From soaps, lip balms, honey (made by bees who pollinate fireweed), teas, jams/jellies, beer, donuts, and so much more; there’s a fireweed product for everyone. Many businesses use fireweed in their name, including the much-loved Fireweed Community Market that runs every Thursday afternoon from May 13 until September 23, for the 2021 season. It’s not very hard to find a souvenir with fireweed on it or in it, to take a little piece of the Yukon home with you.

Every year there is a competition in the territory for who will find the first crocus. Not only will you get bragging rights, but your photo of the crocus will be featured in the local newspaper. The prairie crocus was the original flower of the Yukon back in 1954. Unfortunately, Manitoba had laid claim to it before the Yukon could, so in 1957 our official flower changed to fireweed. The prairie crocus is the first to blossom in the spring and even sometimes when there is still snow on the ground. Typically, the crocus appears towards the end of April on the sunny south-facing hillsides first, followed by the crocuses that call forests their home. The whole plant, including the blossom, is covered in fuzzy white hairs. Inside the blossom, it can be up to 10°C warmer than the outside air- allowing insects to have a better place to take shelter. The blossoms are open during the day and closed at night. The plant is poisonous. If ingested, it can cause gastrointestinal symptoms and can cause mild skin irritations with contact. Varying in colours from pale blue to a deep purple, you can’t help but smile when you see their friendly faces.

Lupines are a special type of flower found in the Yukon that improves the soil by adding nitrogen and organic matter. Although all three types of lupines found in the territory help the land, lupines are poisonous and have been known to kill animals that feast on them. It may be difficult to differentiate between the three types, but here are a few helpful tidbits. The Arctic lupine is one of the most common flowers in the Yukon and can be found all over the territory. Yukon lupine is only found in the Carcross dunes. It is believed that the Yukon lupine evolved during the time of Beringia to be the plant we see today. The Nootka lupine can be found in the mountain passes of the Haines Road and South Klondike Highway. All three types of lupines found within the Yukon have purple blossoms. To help even further, both the Nootka and the Yukon lupines have small hairs on the upper surface of their leaves, while the more widely growing Arctic lupine do not. With the blossoms peeking in mid-to-late-June, the fields full of lupines really add to any already-scenic-drive.

There is no shortage of edible berries growing wild throughout the territory- no wonder the bears love it up here so much! First, it is very important to note that you may not pick any berries on First Nations Settlement Land (unless you belong to that First Nation) nor on private properties. Always behave respectfully and only take what you need. The first berry to pop out is the Wild Strawberry (Fragaria virginiana). Their white blossoms are replaced with tiny juicy red strawberries in July and can be found in forests and meadows. Dwarf Raspberry (Rubus arcticus ssp. Acaulis) plants lose their deep pink or purple flowers and bear small raspberries that are packed with so much flavour, throughout late July and August. During our early fall, in late August and September, Mountain Cranberry- Low-bush Cranberry (Vaccinium vitis-idaea ssp. Minus) can be found with ripe dark red berries that are best picked after the first frost. They are much smaller than your typical grocery store cranberry, but they too are filled with intense flavour and freeze well for a Thanksgiving cranberry sauce.

While out enjoying the flora, it is important to be aware of your surroundings. Always be Bear Aware, stick to designated trails to avoid trampling the plants and always leave the area as you found it. In some cases, it is important to clean off your shoes to help prevent the spread of invasive species. You will see before you enter Bert Law Park, just off the Millennium Trail, there is a footwear brush for you to use. To help further in reducing our invasive species, you can assist by pulling them out-as per the guidelines set out by Yukon Invasive Species Council. Thanks for doing your part in keeping the Yukon beautiful and natural.

Special thank you to Marie Desmarais from the Tourism/Visitor Information Centre for all your help!

Hero Picture- Standing on the side of the road to snap this pic of a field of Lupines in the Kluane area. Photo by Adam Luciano 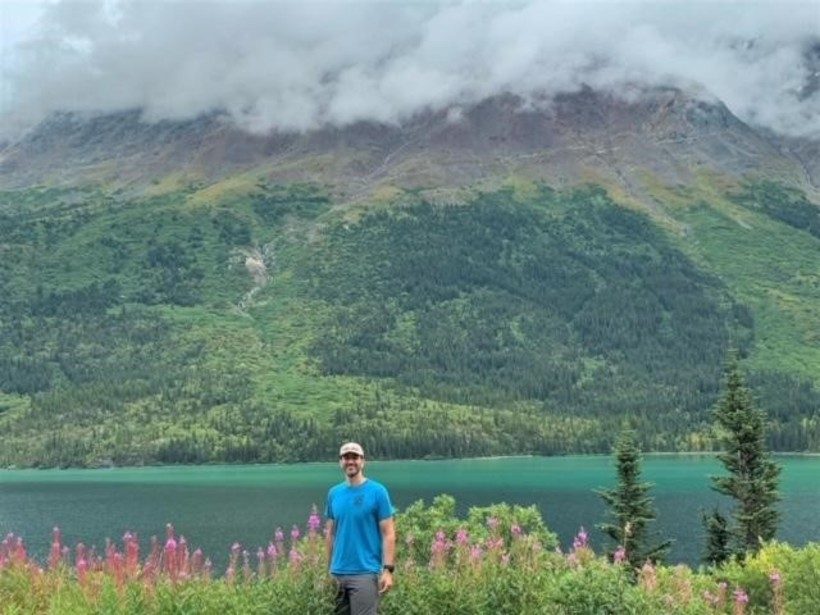 Some fireweed growing along the South Klondike Highway 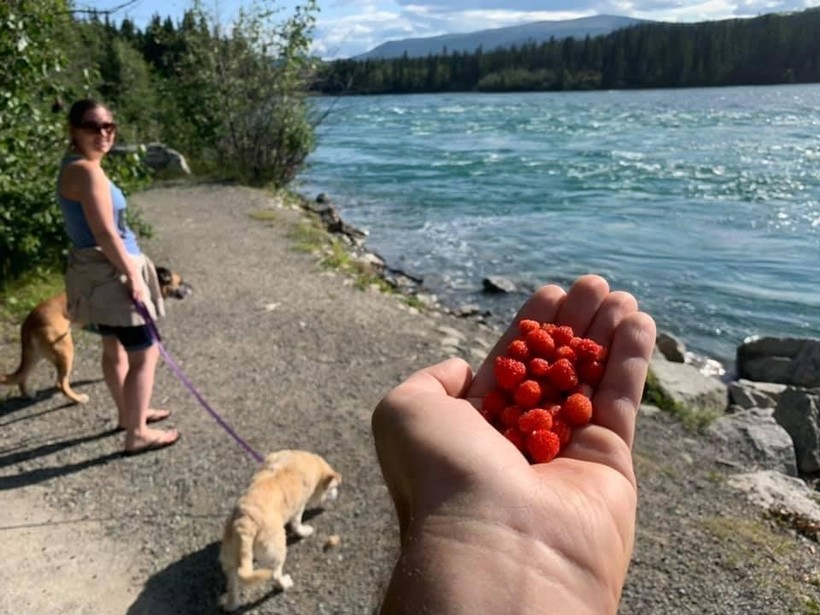 Some delicious strawberries along our walk with the dogs 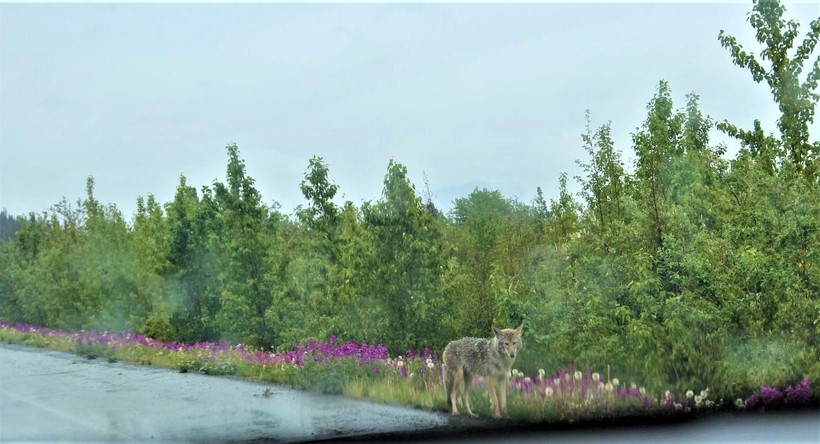 Roadside Coyote in the rain, with some beautiful wildflowers blooming behind 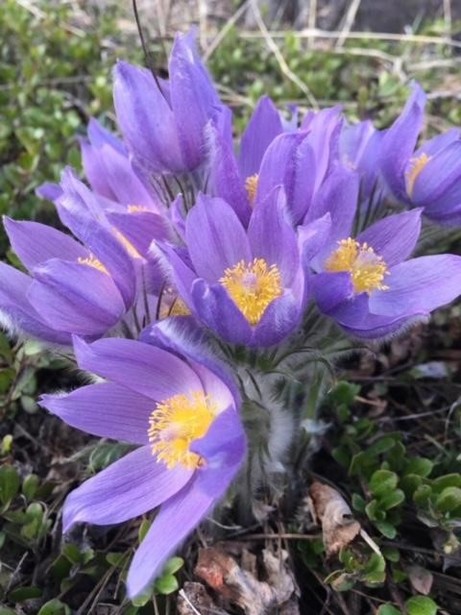 Up close with the crocuses 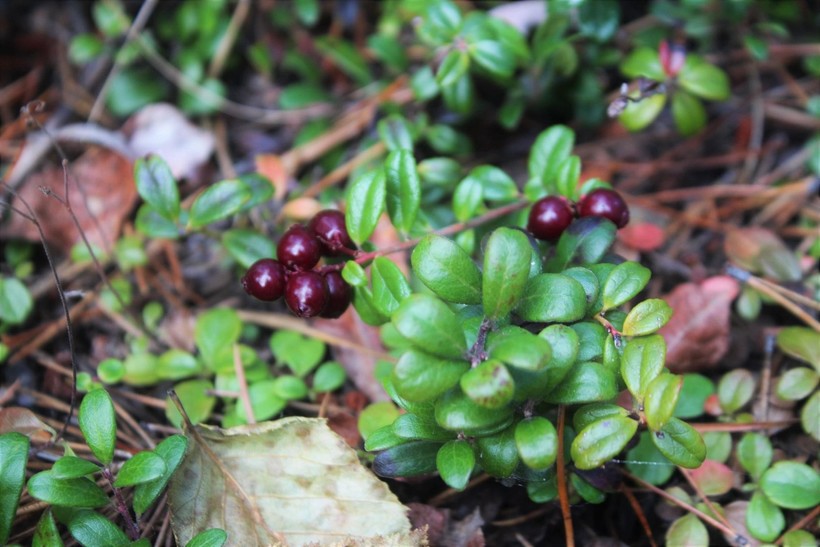 Ripe and ready cranberries on their low-lying bush 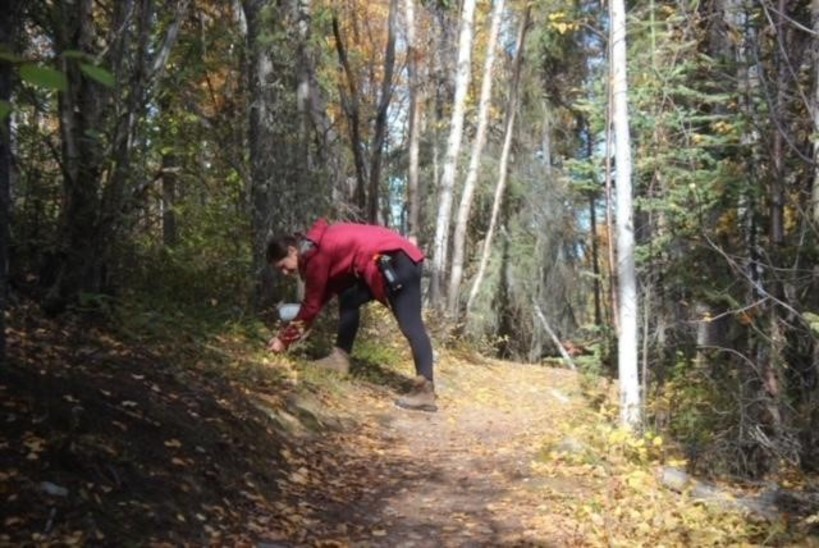 Bear-spray on, as I harvest some cranberries for the colder times ahead