Just another day at the office and for once, I had a bit of downtime. What does a travel agent do when they have a few minutes? We plan our own adventures! With travel being very limited this year and I knew we wanted to vacation with our two trusty canines, I started my research. With the Yukon’s borders closed to everyone except British Columbia and the other territories this summer, I pinpointed what we really wanted to do during our “just one year in the Yukon” and Tombstone Territorial Park was at the top of our list. I was fortunate enough to find a tent pad still available during the Labour Day long weekend at Talus Lake campground. Any other year- this would have been impossible, especially since it was less than two weeks away. It was the sign I needed to find a way for this trip to work.

First Step- Getting There

I knew we wouldn’t have enough time or ability to hike in. Our pups are a 15.5-year-old 20lbs chihuahua-mix named Penny, whose body type resembles a corgi. She’s long-bodied and short-legged. Then there’s our nine or ten-year-old tripod rescued Belgian Malinois mix named Amy. She has the heart to hike it but just doesn’t have the stamina anymore. Plus, who am I kidding- I couldn’t hike the whole trail there and back with my pack on and really, we only had a long-weekend (Yah, that’s the excuse I’ll use!) Please disregard my other excuses- we just didn’t have the time to hike to Talus Lake! So logically, we needed a ride or we had to car camp and not be anywhere near the actual Tombstone mountains. As they say, “Where there’s a will there’s a way!”. I called Trans North Helicopters and was greeted with the friendly voice of our soon-to-be-pilot, Nathan. He was amazing! Nathan had availability to drop us off at Talus lake on Saturday and to pick us up on Monday-weather permitting. Dogs were a nonissue, even though our Amy can be a bit of a jerk with strangers. Having transportation into the park finalized, I went ahead and booked our tent pad for two nights. Things were coming together.

Our planned departure was 10:00 AM, but we all know Dawson City weather doesn’t care about plans. The fog rolled in the night before and still hadn’t burned off with the sun. Nathan kept us updated as he monitored the situation from the Dome. By about mid-day, we were clear for takeoff! After our safety briefing and loading our packs, baggage and dogs- we were buckled in for our adventure. Surprisingly, the dogs were pretty good during our flight. Penny, who is also deaf, slept on my lap for the thirty-minute scenic ride while Amy sat beside me watching the fall colours go by. Smoothest helicopter ride I have ever taken- and no it wasn’t my first one. After landing on the designated helicopter pad and unloading our belongings, Nathan was off and we were left to hike the approximately one km trail to camp.

Set Up and Explore

We were the only ones at the campsite when we arrived. I have never felt so alone as I did in that instance. There is no wifi, no cell service and even our inReach wasn’t cooperating. So this is what it feels like to be completely alone. We are not strangers to being in remote areas, but this time it just felt different. We were surrounded by enormous mountains and tundra that appeared to go on for kilometres-without a single other person on sight. It was really neat and creepy all in one. We set up our tent and explored our temporary home. The park does an amazing job of taking care of this campground. Every season they fly in the tent pads, a cook tent, bear-proof lockers, greywater barrels and an outhouse. Throughout the camping season, helicopters deliver empty barrels for waste and remove the full ones. It is quite an impressive setup. For two days we wandered the trail systems, exploring and snapping off hundreds of pictures as we breathed in the crisp mountain air. What an experience!

And Then There’s the Weather

So the whole trip wasn’t all sunshine and breathtaking mountains. We experienced all four seasons in a day. We had rain every night that turned to snow. We awoke the first morning to a light dusting of snow that quickly burned off with the sun. It was freezing at night! Of course, we expected it and had packed it appropriately, but it’s still always surprising how cold it really does get. Lucky for me, Penny snuggles into my mummy sleeping bag with me and we help keep each other warm. Amy and Adam have an arrangement as well, so basically- only the dogs get to sleep well. On night number two the weather was unbelievable. The rain/hail was coming down hard and the winds were trying to lift our tent off of the pad while bending our poles. Adam and I spread out the weight in the tent to try and hold it down as we physically held the poles from crashing in on us. We held our breath and crossed our fingers, toes and eyes that our tent fly would stay attached to our tent. And then it was finally morning and the majority of the storm was done. If we even got an hour of sleep combined, I’d be surprised! The winds did continue and we hoped our chauffeur would be able to land.

We packed up and headed to the helipad while we said our goodbyes to this remote wonder- hoping that we would one day see it again. Surprisingly, Nathan was able to land at our pre-arranged time. It was a bit of a bumpy ride back to Dawson City, but considering the strength of the wind, we barely felt it. Again, Penny slept and Amy curled up beside me. How many dogs can say that they have travelled in a private helicopter to go camping? We got back to Dawson City and stuffed our gear into our vehicle- we still had many hours of driving ahead of us. With minimal sleep and through some awful construction zones of just mud, we made the trek back to Whitehorse. You know you’re tired when you don’t even bother stopping at Braeburn Lodge for their famous giant cinnamon buns. Finally, we were home. There’s nothing like a hot shower and a warm cozy bed after a sleepless cold night and a long drive home.

Having the option to get dropped off by a helicopter has made this stunning secluded area open to a wider range of experienced people and pets. Chase your dreams. The sky is your limit- although, it’s less of a limit when you’re flying through it. If there’s an adventure out there that you want to explore- let us know. Tombstone Territorial Park definitely needs to be added to your list, if it’s not already there.

*Note: We did not end up having the campground to ourselves after all. At Talus Lake, there was one single hiker on Saturday night and a couple and their dog Sunday night. It was really neat to hear both of their takes on the hike in and kudos to them for making the trip on foot!

Hero Picture- Family picture while waiting for our lift back to Dawson City. Photo set up by Adam Luciano and timer used 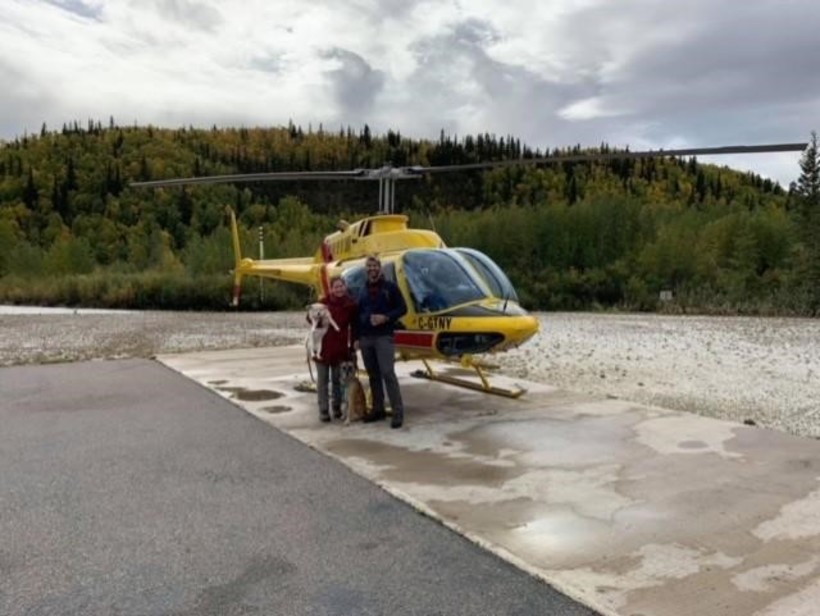 About to embark on our adventure 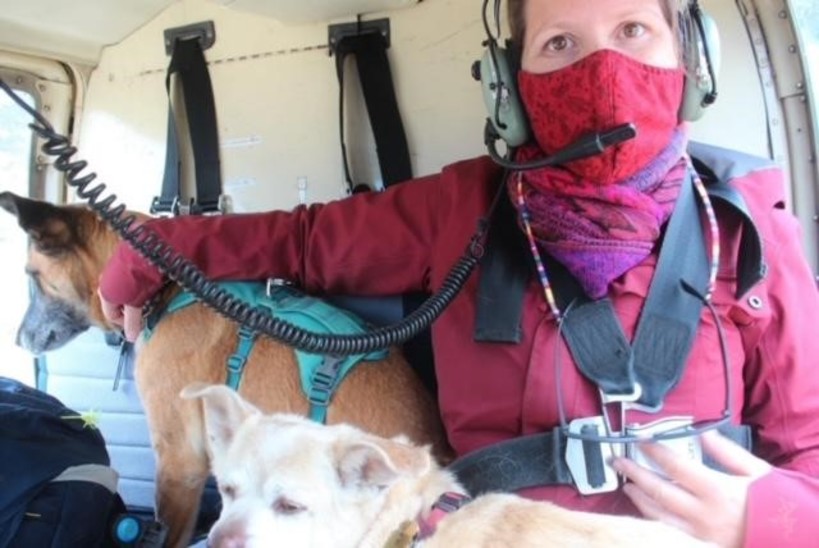 And we're off. Penny (little dog on my lap) slept the whole ride 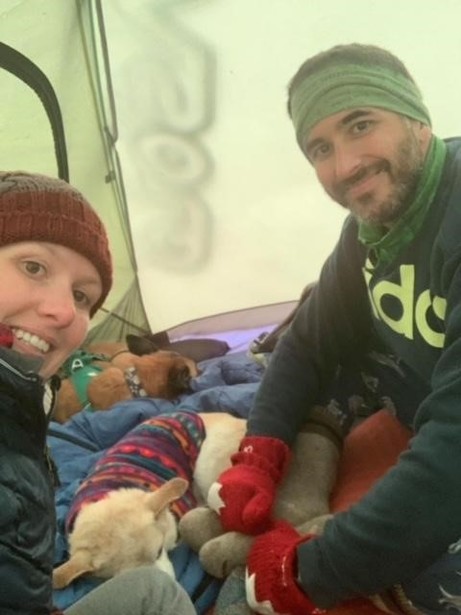 Two adults, two dogs and our gear in a three person tent. Good thing Penny shares my sleeping bag with me!

Selfie taken by me 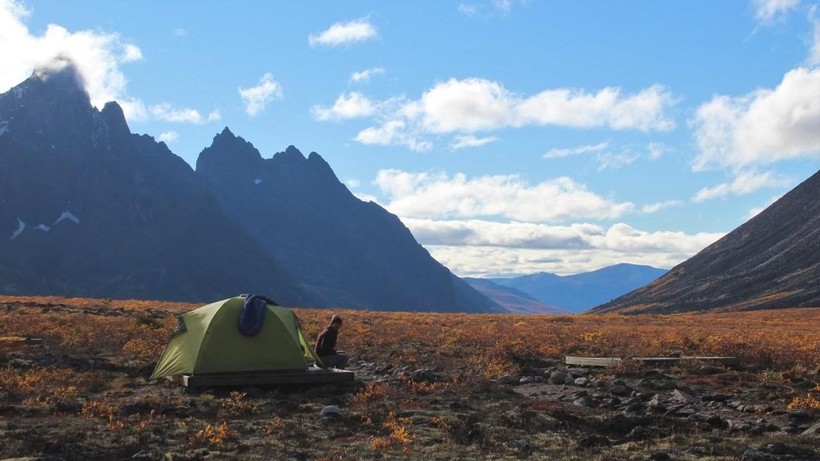 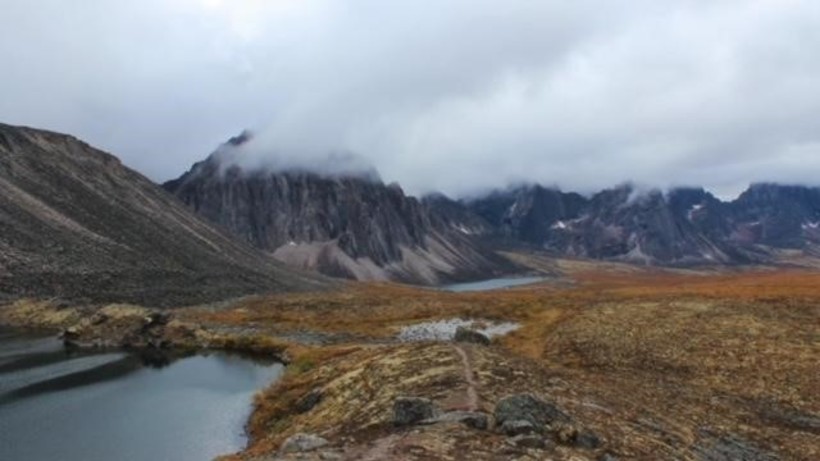 Part way up the hiking trail towards Divide Lake looking back at our camp. Tiny white dot in the distance, in front of the lake, is the cook tent 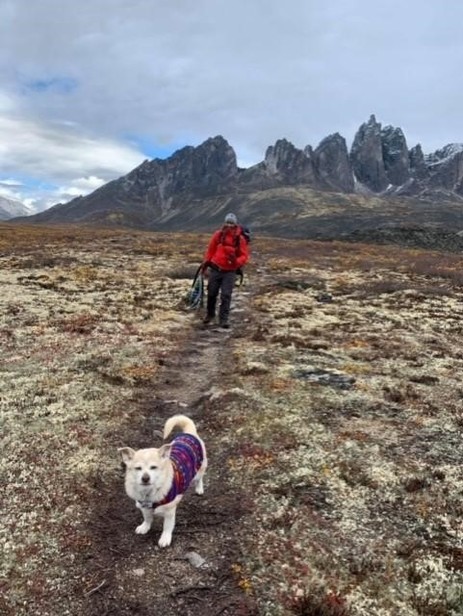 Hiking back to the heli-pad to be picked up