When you think about the Yukon, you automatically think about gold. Even while you move around the territory, you will see a person panning on our licence plates. The Gold Rush was the only thing that was taught in school about the Yukon and is the one thing everyone asked us about when we told them we were moving to the territory. “Are you going to pan for gold?” or “Bring me back some gold” was said by our friends and family before we made our trip across the country. Unlike the Gold Rush prospectors, we did not have to hike kilometer after kilometer in the snow and conquer countless mountains to look for gold, we simply had to drive 533 km to Dawson City.

I contacted Goldbottom Mine earlier in the week and arranged a tour with Brenda. With COVID going on, we were lucky that they were able to introduce us to our new obsession. After a fascinating tour of their working mine complete with their own mining history, we were ready to try panning the old-fashioned way. We pulled on a pair of rubber boots and were handed our own pans- we were ready for some pay dirt (earth that is believed to contain gold). Brenda was the greatest teacher. Her enthusiasm and clear demonstrations made us forget about how cold our hands were as our eyes widened to the possibility of gold. I will not go into details about the process of panning as I want you to learn from a professional, but I will tell you that it is NOT like you see on television. The important thing I will tell you is that I found five teeny tiny gold flakes while Adam found none. Brenda donated the little gold flake that she had found to Adam and we named it the Pity Flake. We got to take our gold flakes home with us in two small vials. Mine contained my five flakes and Adam’s with his donated Pity Flake- in case you missed above that I was the better panner (or it was luck just like during the Gold Rush…but I’ll stick with the theory that I have mad panning skills). We had now contracted Gold Fever!

Dredge No. 4 is now a National Historic Site found down Bonanza Creek Road in Dawson City. Guided tours are typically offered during the summer months by Parks Canada. Unfortunately, there were no tours offered during our two visits due to COVID19 closures, but we were able to read the information on the interpretative signs to help understand how it functioned and combined with the information Brenda had given us earlier, we had a pretty good idea how it worked. Dredge No. 4 really is impressive to see in person- I never realized how large they truly are. The first dredge began being used in the Yukon during 1898 and the final four were shut down in 1966. Placer mining procedures are quite different now and have evolved to become more environmentally conscious. Since dredge buckets are no longer needed, many have been repurposed into flower pots that you can see throughout the territory.

Continue driving down the winding Bonanza Creek Road and you will pass a couple more interpretive sites with short walks to learn more about the Gold Rush- they are worth a stop. After the stops, carry on a bit further down the dirt road and you will eventually arrive at Free Claim #6. This is a site where any individual can try panning for gold; compliments of the Klondike Visitors Association. There are a couple of rules you must follow including hand tools only (not provided), not for commercial use and you must stay within the boundaries of the claim. There is a pile of pay dirt just waiting for you to scoop some into your pan as the cold deafening creek rushes by on your left. We ventured here with our pan, our rubber boots, our two vials with our previously acquired flakes and our trusty canines to help sniff out the good dirt. Turns out, the dogs are not very helpful at choosing the good dirt. Amy, who is missing a front leg, still managed to dig into the paydirt with her one paw to get us “the best dirt”, but pan after pan we came up empty. It is quite the addiction, “Just one more pan” was said numerous times by both of us. Finally, Adam scored a few flakes. This time around, I only found one flake; Adam won this round of panning. We left the free claim as the sun was setting- a few flakes richer and excited for our next time.

The gold industry is still alive and well in the Yukon and it’s nice to understand a tiny bit of the process that prospectors went through during the Gold Rush and what current-day mining is like. Panning is quite addictive! I’m not sure if it was our amazing teacher or the gamble of it all that makes this such a fun activity, but it is definitely worth trying. You never know what your luck will bring. Maybe, like some prospectors before you, you too will strike it rich! 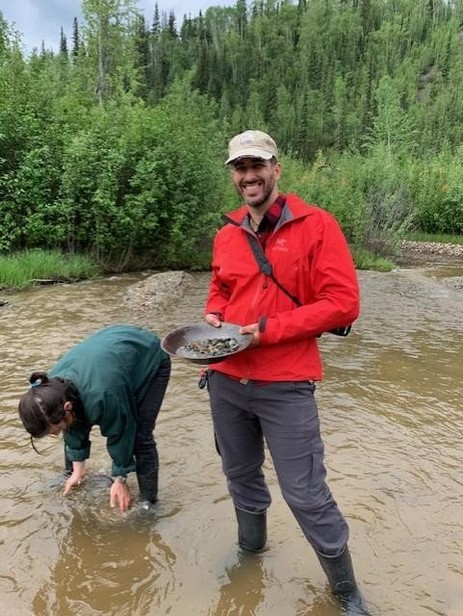 Adam learning to pan from Brenda at Goldbottom Mine Tours 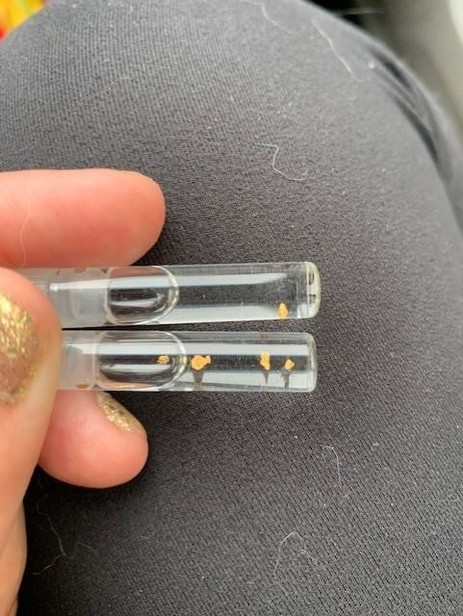 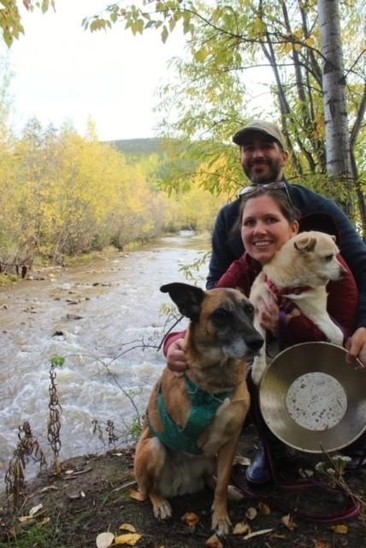 Tripod set up by Adam 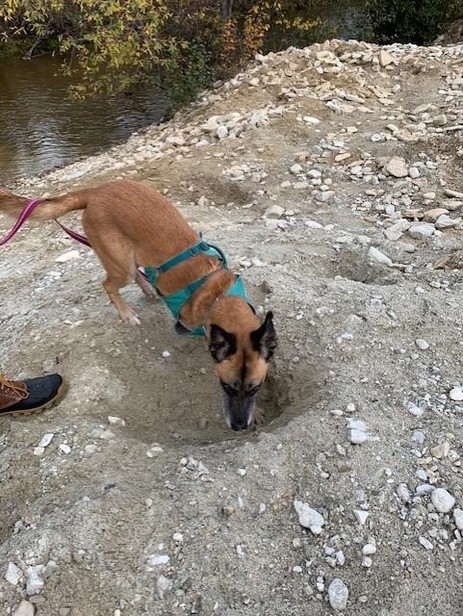 Amy trying to find us the good paydirt. Photo taken by me 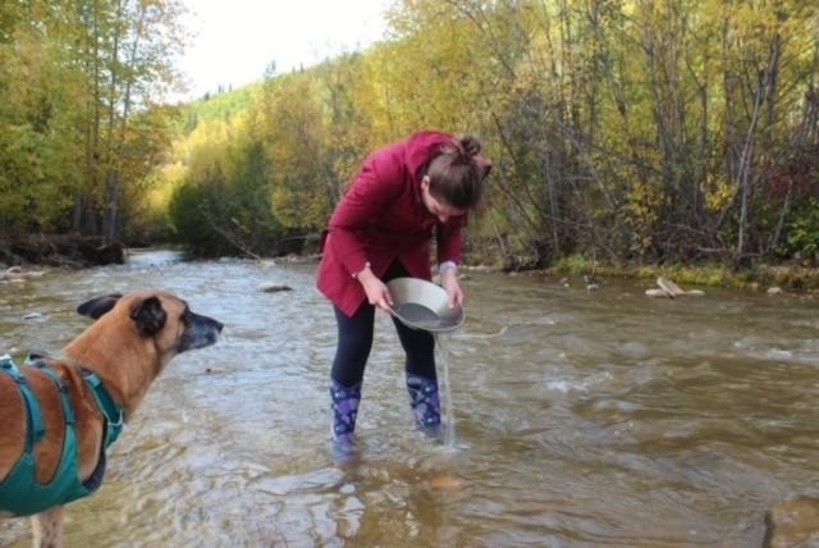 Me panning at the Free Claim #6